The article rate here slowed down in February due to my preparation for B-Sides SF and RSA 2013. I even had to give a brief presentation about Hacking Web Apps at my company’s booth. (Followed by a successful book signing. Thank you!)

In that presentation I riffed off several topics repeated throughout this site. One topic was the mass hysteria we are forced to suffer from web sites that refuse to write safe SQL statements.

Those of you who are developers may already be familiar with a SQL-related API, though some may not be aware that the acronym stands for Advanced Persistent Ignorance.

Here’s a slide I used in the presentation (slide 13 of 29). Since I didn’t have enough time to complete nine years of research I left blanks for the audience to fill in. 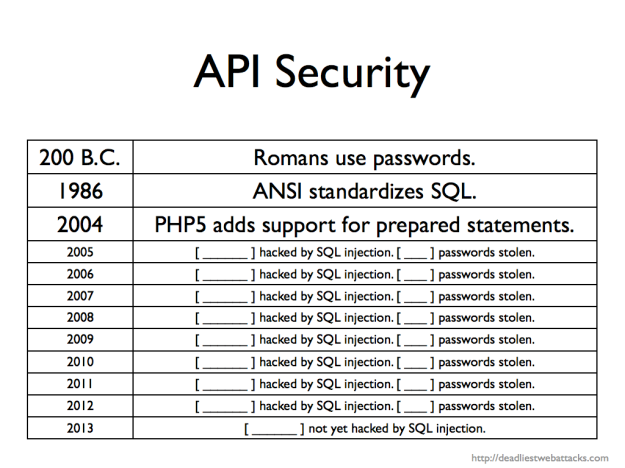 Now you can fill in the last line. Security company Bit9 admitted last week to a compromise that was led by a SQL injection exploit. Sigh. The good news was that no massive database of usernames and passwords (hashed or not) went walkabout. The bad news was that attackers were able to digitally sign malware with a stolen Bit9 code-signing certificates.

I don’t know what I’ll add as a fill-in-the-blank for 2014. Maybe an entry for NoSQL. After all, developers love to reuse an API. String concatenation in JavaScript is no better that doing the same for SQL.

If we can’t learn from PHP’s history in this millennium, perhaps we can look further back for more fundamental lessons. The Greek historian Polybius noted how Romans protected passwords (watchwords) in his work, Histories1:

To secure the passing round of the watchword for the night the following course is followed. One man is selected from the tenth maniple, which, in the case both of cavalry and infantry, is quartered at the ends of the road between the tents; this man is relieved from guard-duty and appears each day about sunset at the tent of the Tribune on duty, takes the tessera or wooden tablet on which the watchword is inscribed, and returns to his own maniple and delivers the wooden tablet and watchword in the presence of witnesses to the chief officer of the maniple next his own; he in the same way to the officer of the next, and so on, until it arrives at the first maniple stationed next the Tribunes. These men are obliged to deliver the tablet (tessera) to the Tribunes before dark.

More importantly, the Romans included a consequence for violating the security of this process:

If they are all handed in, the Tribune knows that the watchword has been delivered to all, and has passed through all the ranks back to his hands: but if any one is missing, he at once investigates the matter; for he knows by the marks on the tablets from which division of the army the tablet has not appeared; and the man who is discovered to be responsible for its non-appearance is visited with condign punishment.

We truly need a fitting penalty for SQL injection vulnerabilities; perhaps only tempered by the judicious use of salted, hashed passwords.