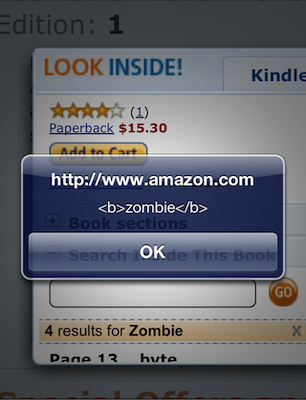 This is how it began. Over two years ago I unwittingly planted the seeds of an undead horde into the pages of my book, Seven Deadliest Web Application Attacks.

Only recently did I discover the rotted fruit of those seeds festering within the pages of Amazon.

On page 16 of the book there is an example of an HTML element’s syntax that forgoes the typical whitespace used to separate attributes. The element’s name is followed by a valid token separator, albeit one rarely used in hand-written HTML. The printed text contains this line:

The “Search Inside” feature lists the matches for a search term. It makes the search term bold (i.e. adds <b> markup) and includes the context in which the search term was found (hence the surrounding text with the full <img/src="."alt="" /> element). Then it just pops the contextual find into the list, to be treated as any other “text” extracted from the book.

Finally, the matched term is placed within an anchor so you can click on it to find the relevant page. Notice that the <img> tag hasn’t been inoculated with HTML entities; it’s a classic HTML injection attack.

This has actually happened before. In December 2010 a researcher in Germany, Dr. Wetter, reported the same effect via <script> tags when searching for content in different security books. He even found <script> tags whose src attribute pointed to a live host, which made the flaw infinitely more entertaining. 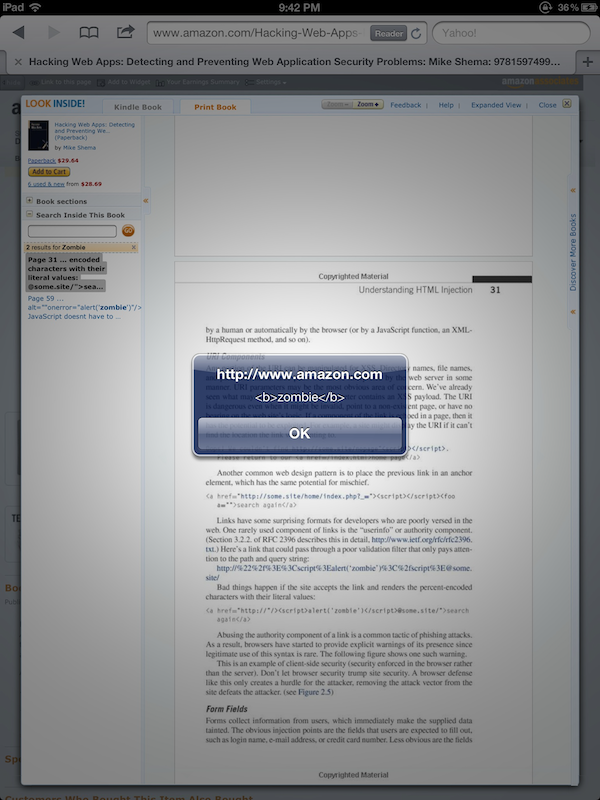 In fact, this was such a clever example of an unexpected vector for HTML injection that I included Dr. Wetter’s findings in the new Hacking Web Apps book (pages 40 and 41, the same <img...onerror> example shows up a little later on page 59). Behold, there’s a different infestation on page 31. Try searching for zombie again. This time the server responds with a JSON payload that contains straight-forward <script> tags. This one was more tedious to track down. The <script> tags don’t appear in the search listing, but they do exist in the excerpt property of the JavaScript object that contains, applies bold tags, etc. for matches:

I only discovered this injection flaw when I recently searched the older book for references to the living dead. (Yes, a weird – but true – reason.)

How did this happen?

One theory is that an anti-XSS filter relied on a deny list to catch potentially malicious tags. In this case, the <img> tag used a valid, but uncommon, token separator that would have confused any filter expecting whitespace delimiters. One common approach to regexes is to build a pattern based on what we think browsers know. For example, a quick filter to catch <script> tags or opening tags (e.g. <iframe src...> or <img src...>) might look like this:

A payload like <img/src> bypasses the regex and the browser correctly parses the syntax to create an image element. Of course, the src attribute fails to resolve, thereby triggering the onerror event handler, leading to yet another banal alert() declaring the presence of an HTML injection attack.

The <script> example is less clear without knowing more about the internals of the site. Perhaps a sequences of stripping quotes and buggy regexes misunderstood the href to actually contain an authority section? Don’t have a good guess for this one.

This highlights one problem of relying on regexes to parse a grammar like HTML. Yes, it’s possible to create strong, effective regexes. However, a regex does not represent the parsing state machine of browsers, including their quirks, exceptions, and “fix-up” behaviors. Fortunately, HTML5 brings a measure of sanity to this mess by clearly defining rules of interpretation. On the other hand, web history foretells that we’ll be burdened with legacy modes and outdated browsers for years to come. So, be wary of those regexes.

How did this really happen?

Well, I listen to various music while I write. You might argue that it was the demonic influence (or awesome Tony Iommi riffs) of Black Sabbath that ensorcelled the pages or that Judas Priest made me do it. Or that March 30, 2010 – right around the book’s release – was a full moon. Maybe in one of Amazon’s vast, diversely-stocked warehouses an oil drum with military markings spilled over, releasing a toxic gas that infected the books. I think we’ll never know for sure.

Maybe one day we’ll be safe from this kind of attack. HTML5 and Content Security Policy make more sandboxes and controls available for implementing countermeasures. But I just can’t shake the feeling that somehow, somewhere, there are more lurking about.

Until then, the most secure solution is to – 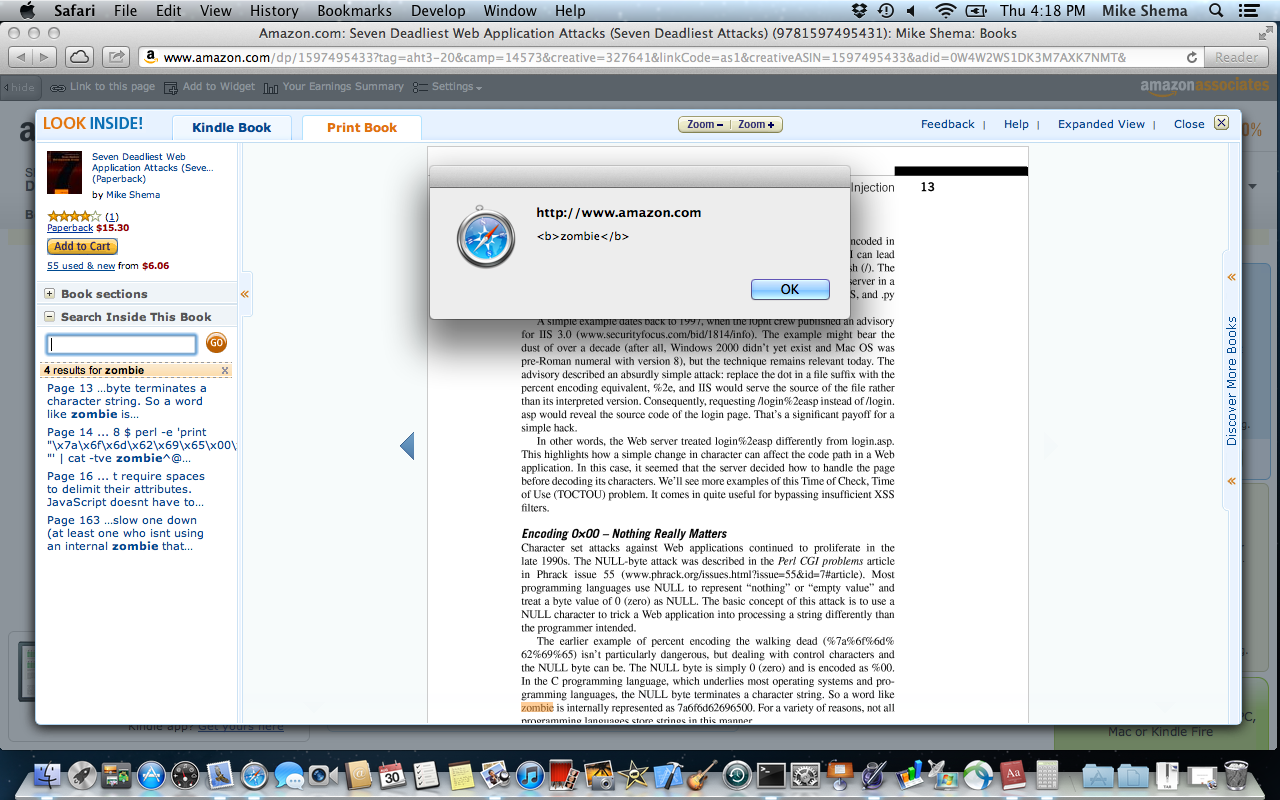