A minor theme in my recent B-Sides SF presentation was the stagnancy of innovation since HTML4 was finalized in December 1999. New programming patterns emerged over that time, only to be hobbled by the outmoded spec. To help recall that era I scoured archive.org for ancient curiosities of the last millennium. (Like Geocities’ announcement of 2MB of free hosting space.) One item I came across was a Netscape advisory regarding a Java bytecode vulnerability – in March 1996. 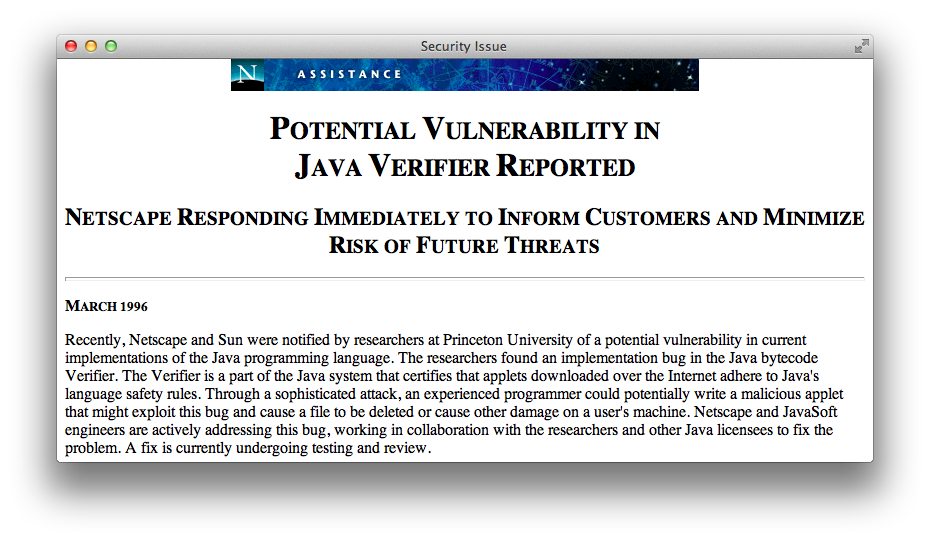 The primary complaint against browser plugins is not their legacy of security problems (the list of which is exhausting to read). Nor that Java is the only plugin to pick on. Flash has its own history of releasing nothing but critical updates. The greater issue is that even a secure plugin lives outside the browser’s Same Origin Policy (SOP).

When plugins exist outside the security and privacy controls enforced by browsers they weaken the browsing experience. It’s true that plugins aren’t completely independent of these controls, their instantiation and usage with regard to the DOM still falls under the purview of SOP. However, the ways that plugins extend a browser (such as network and file access) are rife with security and privacy pitfalls.

For one example, Flash’s Local Storage Object (LSO) was easily abused as an “evercookie” because it was unaffected by clearing browser cookies and even how browsers decided to accept cookies or not. Yes, it’s still possible to abuse HTTP and HTML to establish evercookies. Even the lauded HTML5 Local Storage API could be abused in a similar manner. It’s for reasons like these that we should be as diligent about demanding “privacy patches” as much as we demand security fixes.

Unlike Flash, an HTML5 API like Local Storage is an open standard created by groups who review and balance the usability, security, and privacy implications of features designed to improve the browsing experience. Establishing a feature like Local Storage in the HTML spec and aligning it with similar concepts like cookies and security controls like SOP (or HTML5 features like CORS, CSP, etc.) makes them a superior implementation in terms of integrating with users’ expectations and browser behavior. Instead of one vendor providing a means to extend a browser, browser vendors (the number of which is admittedly dwindling) are competing with each other to implement a uniform standard.

Sure, HTML5 brings new risks and preserves old vulnerabilities in new and interesting ways, but a large responsibility for those weaknesses lies with developers who would misuse an HTML5 feature in the same way they might have misused XHR and JSONP in the past. Maybe we’ll start finding plaintext passwords in Local Storage objects, or more sophisticated XSS exploits using Web Workers and WebSockets to scour data from a compromised browser. Security ignorance takes a long time to fix. And even experienced developers are challenged by maintaining the security of complex web applications.

HTML5 promises to obviate plugins altogether. We’ll have markup to handle video, drawing, sound, more events, and more features to create engaging games and apps. Browsers will compete on the implementation and security of these features rather than be crippled by the presence of plugins out of their control. 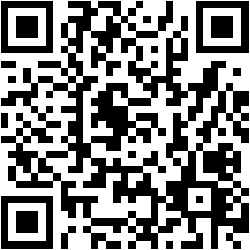 Getting rid of plugins makes our browsers more secure, but adopting HTML5 doesn’t imply browsers and web sites become secure. There are still vulnerabilities that we can’t fix by simple application design choices like including X-Frame-Options or adopting Content Security Policy headers.

Would you click on an unknown link – better yet, scan an inscrutable QR code – with your current browser? Would you still do it with multiple tabs open to your email, bank, and social networking accounts?

Who cares if “the network is the computer” or an application lives in the “cloud” or it’s offered via something as a service? It’s your browser that’s the door to web apps and, when it’s not secure, an open window to your data.